A budget that shows Project Fear is a lie

A budget that shows Project Fear is a lie

DO YOU REMEMBER that David Cameron’s Government claimed a vote to leave the EU would immediately hit GDP by 5% and cost 500,000 jobs? Global Britain was one of only a tiny number of economic observers to argue this was, well, bunkum.

We said the economic impact would be minimal in the short term and assuming sensible and prudential macro-economic management by HM Government, positive in the medium to longer term.

Whatever one may think of the policies, yesterday’s Budget was only possible because the British economy has continued, despite every official warning has been wrong (and they STILL  continue from the Bank of England and Treasury).

Let us remind ourselves of what has happened since the Referendum. GDP growth has continued – now into its eighth successive year – quite a contrast to much of the Eurozone – unemployment that is at a 40-year low. Since the referendum there has been a staggering 606,000 more people in work in the UK. Suck that up and consider it.

Wage growth is now picking up, and at 3.3% and looks set to outstrip inflation for the foreseeable future. Even our untrustworthy forecasters say this.

Moreover, the additional £20.5bn to the NHS and indeed the MANY  other pledges, regardless as to whether one believes these are good policy choices or not, are only possible because the economy has continued to grow. The decision of the British people to leave the EU has not caused economic dislocation, as widely predicted by our establishment – on the contrary the UK economy continues to prosper and in our view the current official forecasts remain too low.

However, our BREXIT comments aside, we would make the following observations on yesterday’s budget.

Austerity at an end? What austerity…

It is odd to create a brand of pain and punishment when the truth has been public spending has continued to rise in real terms. Over the last eight years the Government has, however, succeeded in creating a belief through its own branding that these have been really tough times for the public sector. The truth is rather different, with real aggregate rises in spending, albeit at a reduced rate than originally planned, over the last six years.

More accurately there has been selective austerity in areas such as local government spending, defence, law and order and housing. Social transfers have continued to rise strongly, despite record employment levels, as is demonstrated below. This begs the question as to how closely controlled welfare spending is and what sort of cyclical upturn might be expected should economic growth go into reverse? 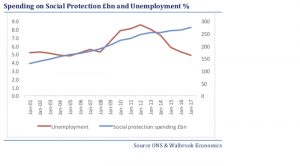 The Budget 2018 was, however, all about putting bones on the self-labeled “end of austerity.” The new measures were modest, outside the already published substantial £20.5bn real spending pledge to the NHS over the next 5 years. The main beneficiary was defence (£1bn for cyber activity), £1bn to smooth universal credit and a one off schools payment of £440m. Also noteworthy was the end of all new PFI deals.

Tax has been steadily rising as a proportion of GDP in recent years, as demonstrated by the chart below. Most of the increased take has fallen on ‘stealth taxes,’ pension reform, and closing avoidance loopholes. However the effect has been material as tax to GDP has increased from 34 per cent GDP in 2010 to just under 38 per cent today, the highest level since 1987. 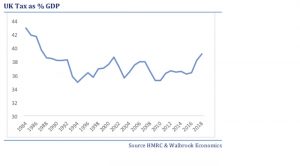 Today’s budget largely left matters unchanged, with no change to pension allowances/ thresholds, corporation tax, inheritance tax or capital gains tax announced. For income tax there was a modest fiscal boost as personal allowances will continue to rise faster than inflation with the manifesto pledge delivered a year early. This benefit will largely impact the lower and middle paid.

Perhaps most noteworthy was the dual attempt, to tax big tech, while reduce by a third, business rates for small retailers / outlets. This clearly is an attempt to shore up the severely ailing High Street.

The proposed ‘Amazon tax’ is currently under consultation with little detail and will only apply to tech companies with global sales of over £500m. It is estimated it will raise a relatively modest £400m which, while it may be the thin end of the wedge, is not material, in my view.

The bottom line is while the cut in business rates is material for small shops I suspect it will have relatively little impact for traditional retailers as they continue to see a gradual attrition of their business models. The tide cannot easily be stemmed.

The OBR forecast of 1.6 per cent, 1.4 per cent, 1.4 per cent, 1.5 per cent and 1.6 per cent over the next five years looks overly cautious in my view, particularly for 2020/21. Real wage growth is picking up strongly. I anticipate it likely to grow in a 3-4 per cent range (buoyed by full employment and a rising national living wage) substantially outstripping CPI of circa 2-2.5 per cent. This, coupled with some fiscal firepower over the next couple of years, could lead to GDP upgrades.

Moreover, assuming OBR forecast the Chancellor retains in excess of £15bn fiscal fire power for spending/tax cuts (around 0.7 per cent GDP) offering the potential to smooth any turbulence caused by Brexit. While I would argue that a cautious approach is advised, given the cyclical nature of both tax receipts and spending commitments – and eight years into recovery the underlying position remains weak, it may well be £15bn available proves to be an underestimate. The Government has more likely than not left some fire power in the locker.

The bottom line is I expect GDP growth to exceed OBR forecasts in 2020 and 2021 with 2 and 2.2 per cent growth respectively.