The fog is slowly lifting. The Prime Minister has finally put some flesh on ‘BREXIT means BREXIT’ and outlined the Governments key objectives over the BREXIT negotiations. While the devil continues to lie in the detail it is clear a ‘clean’ BREXIT is the aim with the UK formally leaving the EU, the Customs Union and the jurisdiction of the ECJ. Intriguingly Sterling enjoyed its best day for months while equities one of their worst.

While emphasising she did not envisage paying significant amounts into the EU budget post leaving, the Prime Minister held open the possibility of continuing with certain EU agencies, albeit without detail. This may include areas like EU open skies, pharmaceutical drug licencing, Europol, ERASMUS, certain educational and science collaborative projects and the like. She has left no wriggle room however on the competence of the ECJ, payments to the EU, freedom of movement, or single market membership.

Theresa May was very clear yesterday that she sees the long term success of the EU as critical to UK interests. A potential disorderly breakup of the EU remains a key risk of a far greater magnitude than BREXIT given the impact of any break-up of the Euro would have on the global banking system. To this end Theresa May is proposing a comprehensive free trade deal with the EU with similar reciprocal access as is currently the case.

As had previously already been indicated the full EU acquis communautaire of EU law will be ported into UK law, prior to leaving, to try and provide legal certainty and continuity. However she was clear the UK will leave the Single Market, thus enabling the UK to sign trade deals with third party nations in future, while accepting that re-creating regulation would be counter-productive. For example, maintaining regulatory harmony in the car industry, or financial services regulation. However as Canada found out this will take some negotiating.

The speech talks about the UK’s European heritage and explicitly talks about the UK staying fully engaged in the continent. While some UK-EU diplomatic architecture will clearly be required May’s emphasis on common security and defence underlines her desire to remain a key ally.

Her speech is littered with references to ‘global Britain’ emphasising the desire for global free trade and co-operation. She also states that the UK has had indications from US, China, Brazil, Gulf States, Australia and New Zealand that they would welcome free trade deals which gives some credibility to the ‘global Britain’ claim.

Reference is also made to the four component nations of the UK and how new competences gained from Brussels will, where appropriate, be passed down to the devolved Parliaments. Specifics are not mentioned for areas for further devolution but are likely to include agriculture, fisheries and energy. Although the situation remains volatile, on balance the risk of a second Scottish Referendum is receding, partially as polls suggest ‘No’ would win and partially as the SNP’s popularity seems to have peaked, albeit it at a very high level.

In terms of timetable Theresa May indicated a desire to reach agreement with the EU within a 2 year time horizon however suggesting a phased implementation of key competences afterwards at a mutually beneficial pace in order to try and provide certainty and avoid a ‘cliff edge.’

Her speech was effectively free trade as before without the EU machinery, but is it deliverable?

May’s speech was clearly aimed for both domestic and international consumption. She has tried to re-assure global investors and diplomats that the UK is not retreating into an isolationist shell. We think most commenters understand this although clearly words and delivery are different matters.

While the UK will quite easily be able to withdraw from the institutions of the EU it is not clear that transitional agreement will be made, or indeed the terms of trade agreed, within the timeframe. The difficulty Canada had in reaching its deal, which will require agreement of each of the other 27, underlines this.

Ignoring the complexities of an agreement the EU is facing multiple challenges. Critical elections may determine its fate in H1 2017 and indeed render the question whom will Prime Minister May be dealing with? The EU’s banking crisis remains unabated, growth is patchy and elusive in certain jurisdictions, the migration and security crisis is unresolved and public support for necessary Euro Federalism to provide the required single currency stability, is not there.

Further, the early signs are that president Trump will be far from supportive of the EU, to say the least. Given all this BREXIT is one negotiation they could do without. This weakness provides an unpredictability into the negotiations with rancour potentially trumping economic logic.

Where does the negotiating balance lie?

Firstly the EU’s trading relationship, while in decline, is still very important to the UK accounting from a current 44% of all UK exports. Clearly trade barriers are something the UK will wish to seek to avoid. 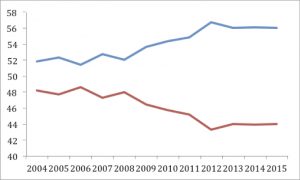 However, while the UK runs a substantial current account deficit with the EU, as is demonstrated from the chart below, (£120bn in 2014) it is broadly in balance with the rest of the world. Thus theoretically the EU has more to lose from the failure to agree a deal than the UK.

This, however, looks at a deal purely in rational economic terms and if the EU judges that it ‘is too easy’ to leave the precedent set becomes clear and obvious. British politicians have always viewed the EU as an economic construct, many European’s have not, putting a higher political and diplomatic weight on it than economic. If that is the case it may be the EU is prepared to sacrifice some economic growth for principle.

That said we currently live in a world where global tariffs are low and generally falling. For example the average tariff into the EU is 1.4%. While this only represents part of the picture, as substantial non-tariff barriers exist, currency swings are generally much more material to competitiveness than trade policy. 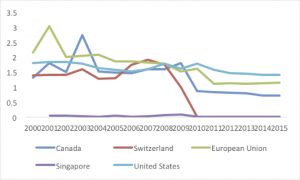 However while on balance the UK should be able to secure a near free trade deal with the EU there are two principle sectors where agreement may be problematic, namely agriculture and finance. Other areas, for example automotive, should be fairly straightforward, as agreement is a win-win situation. The UK is already compliant with EU regulation and is it really, for example, in German car manufacturer’s interest to suffer an 8% tariff when Sterling has already depreciated by 10%?

Agriculture is perhaps the toughest area to reach agreement. While average tariffs are low they can be 20-30% for some agricultural products. This cuts both ways. Currently it makes mangos or peas grown in Kenya inordinately expensive in UK supermarkets but it also means French Brie does not face a tariff.

Without agreement UK exporters to the EU will be disadvantaged, as will Italian truffle exporters to the UK, but African or South American market gardeners would benefit. Overall food prices should fall – the UK imports around 40% of its need s- but some individual sectors would be badly hit.

The debate on financial services is developing quickly. Policy makers are increasingly arguing that no agreement hurts both parties, albeit with a greater cost to the EU via cost of capital and capital access. This is an area where we suspect negotiating will continue until the eleventh hour. THE PM’s speech accepted the UK would not seek to reinvent the regulatory wheel, while Barnier, from the EU side, has also softened his stance suggesting a deal needs to be struck. On balance a deal should be be struck without much cost to UK financial services.

Overall it would be best to try and get a universal deal, aware that no deal would be a great cost to say the German car industry (and UK one) using the current account deficit as the anvil to get agreement in the more problematic areas of agriculture and financial services. Any final deal is unlikely to be struck until near the eleventh hour in 2019. Given the many positives that exist even with “no deal” the worst case impact on economic growth should be no more than at the margin with higher growth also a possibility.